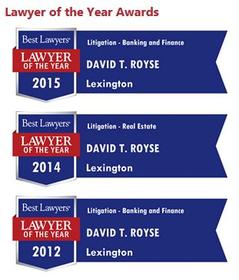 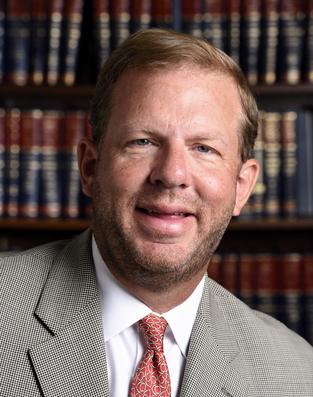 Distinctions
Fellow, Litigation Counsel of America (“LCA”).  LCA is a highly-selective honorary trial lawyer society with a membership limited to less than one-half of one percent of American lawyers. Fewer than 50 private practice Kentucky lawyers have been admitted as Fellows. Fellowships are selected based on excellence and accomplishment in litigation, both at the trial and appellate levels, and superior ethical reputation.

Appointed by two Governors of Kentucky to serve as a Special Justice on the Kentucky Supreme Court.

Appointed by the United States District Court, Eastern District of Kentucky to serve as Plaintiffs' Liaison Counsel in the aviation litigation arising out of the crash of Comair 5191 in Lexington, Kentucky on August 27, 2006.

Best Lawyers® “Lawyer of the Year,”Lexington, Bet the Company Litigation, 2021

-Represented five families in the wrongful death litigation arising from the crash of Comair 5191, a commercial airliner in Lexington, Ky.

-Represented electric utility in defending wrongful death claims from a helicopter crash alleged to have resulted from utility wire strike.  Obtained   dismissal of all claims against client.

Represented client in a federal action in California involving claims of fraud and civil conspiracy in connection with a multi-million dollar equine transaction.  Obtained a Rule 12 dismissal of all claims against client.

Represented an international manufacturer of construction equipment in a lawsuit concerning a challenge by a distributor to a termination of a distributorship agreement and claims for substantial statutory and common law damages as well as injunctive relief to require rescission of the termination. This federal action involved potential major implications for the manufacturer and its relationship with its distributors around the world. Obtained summary judgment ruling in the manufacturer’s favor on all counts.

Represented numerous individual, agricultural, commercial and industrial landowners in negotiations and litigation by the Commonwealth of Kentucky, Department of Highways, in connection with acquisitions and condemnations for road projects, and other assorted road and highway issues.

Collaborated with a longtime electric utility client to plan and coordinate the acquisition of more than 100 parcels of real estate in three counties for a 41-mile electric transmission line.  Representation began in the early planning stages of the project and carried through agreed-upon acquisitions, challenges to the right to condemn, appeals and valuation litigation.

Worked with a water utility client that was acquiring rights-of-way for major water pipeline project.   Assisted with negotiations and, where necessary, eminent domain litigation, ultimately securing rights to construct an important 42” water main to transport water from the Kentucky River to Lexington and surrounding communities, securing a new and dependable water source for Central Kentucky for years to come.

Participated in the successful defense of spouse's renunciation of will in an estate involving more than $25 million in assets. In litigation spanning several years, client prevailed at the trial court level and was upheld on appeal.

Retained after an estate suffered a jury verdict of $3.5 million based on alleged testamentary promises.  Successfully obtained a complete reversal of the verdict against estate and dismissal of claim in approximately six months.

David Royse has represented individuals and families in catastrophic injury and wrongful death cases and has also served as a trusted legal advisor, handling major litigation for many of Kentucky’s top businesses including Keeneland Association, The Jockey Club, Claiborne Farm, Louisville Gas & Electric Company, Kentucky Utilities, Kentucky American Water, East Kentucky Power Cooperative, Blue Grass Energy, Shriners Hospitals for Children, Fifth Third Bank, and others. He represented five families of victims in the crash of Comair 5191 and was appointed by U.S. Judge Karl Forester as Plaintiffs’ Liaison Counsel for the Plaintiffs’ Steering Committee in that litigation.  In 2014, Royse was inducted as a Fellow in Litigation Counsel of America, a highly selective honorary trial lawyer society, and now is an LCA Senior Fellow. Royse has repeatedly been recognized by Best Lawyers in America®, SuperLawyers®, ChambersUSA® and Benchmark Litigation®, earning multiple distinctions as a “Leader in Litigation,” “Local Litigation Star” and “Lawyer of the Year” and "Top 50 in Kentucky." He is rated “AV Preeminent®” by Martindale-Hubbell®, reflecting the highest level of professional excellence.