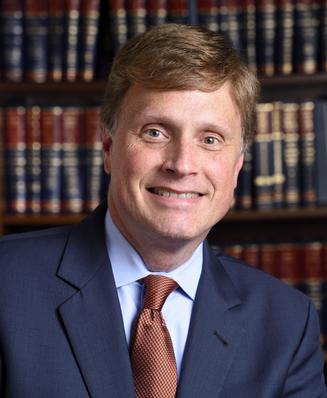 John’s legal career began shortly after he graduated from law school. After first serving as a law clerk for U.S. Court of Appeals for the Sixth Circuit Senior Judge Pierce Lively, John moved to Washington, D.C. to join Akin, Gump, Strauss, Hauer & Feld, L.L.P. He focused on the area of Corporate and Securities Practice as an attorney with the firm.
After his return to Kentucky, he became a partner at Ransdell, Roach & Wier, PLLC, based in Lexington. During his five years with the firm, John had a diverse legal practice, with an emphasis in civil rights and commercial litigation. He also appeared as counsel in 14 jury trials, and successfully argued cases before the Kentucky Court of Appeals, Kentucky Supreme Court and U.S. Court of Appeals for the Sixth Circuit.
In 2003, John became General Counsel to Kentucky Governor Ernie Fletcher. He was later appointed by Governor Fletcher to the Kentucky Supreme Court, serving on the high court from June 2005 to November 2006. While on the Supreme Court John authored more than 20 published majority opinions, including Patterson v. Blair, S.W.3d 361 (Ky. 2005)(defining the contours of vicarious liability under Kentucky law for intentional torts); Williams v. Wal-Mart Stores, Inc., S.W.3d 492 (Ky. 2005)(extensive analysis of McDonnell Douglas framework to Kentucky employment discrimination claims); and Knotts v. Zurich Ins. Co., S.W.3d 512 (Ky. 2006)(important bad faith case establishing the standards for admissibility of post-filing conduct by an insurer). After his tenure on the Kentucky Supreme Court, John returned to private practice at Ransdell & Roach, PLLC.   He now practices law at Ransdell Roach & Royse PLLC.
John, a native of Frankfort, now lives in Lexington with his wife Maria.  His two children, Catherine and Bennett, attend Washington & Lee University.  John and his family attend Southland Christian Church. John has also served on the Board of Directors of the Lexington Christian Academy.
Practice Areas: Equine law, labor and employment law and litigation, commercial litigation, appellate advocacy, administrative law, constitutional law, corporate law and commercial transactions. John also has experience as a arbitrator and mediator.

Achievements:
John has been included in the Best Lawyers in America in the specialties of Appellate Law and Labor & Employment Law.  He is peer-review rated AV Preeminent® by Martindale-Hubbell®, reflecting the highest level of professional excellence.

Education:
University of Kentucky College of Law
J.D., with high distinction, 1992
Order of the Coif (admission restricted to top 10 percent of graduating class)
Recipient of the Faculty Cup (most outstanding graduate)
Articles Editor for the Kentucky Law Journal

Labor and employment law and litigation
Co-lead counsel for Toyota Motor Manufacturing, Kentucky, Inc. in a wage and hour putative class action of over 1,000 employees in Scott County, Kentucky.

Appellate Advocacy
John has successfully argued cases before the Kentucky Court of Appeals, Kentucky Supreme Court and U.S. Court of Appeals for the 6th Circuit. He has also successfully petitioned the Kentucky Supreme Court for discretionary review as well as defeating motions for discretionary review. In addition to offering clients direct representation in appellate proceedings, John also consults with lawyers throughout the state and offers appellate advice and strategy.

Equine Law
As the principal lawyer for Dr. Tom Simon’s Vinery Stables, John oversaw all aspects of the delivery of legal services for Vinery, including complex transactions & commercial litigation. John participated in the syndication of numerous stallions  including Congrats, Pioneer of the Nile and Stormello. John has extensive experience in drafting shuttling arrangements to South America and Australia.  John is passionate about horse racing, and in addition to his legal participation in the industry is also an avid fan of the sport.​

John Roach is a former Kentucky Supreme Court Justice who also served as General Counsel to Governor Ernie Fletcher. In addition to a vigorous trial practice, John has successfully argued cases before the Kentucky Court of Appeals, Kentucky Supreme Court and U.S. Court of Appeals for the Sixth Circuit. Since returning to private practice, John has represented a diverse group of individuals and businesses including Toyota Motor Manufacturing Kentucky, Harrison Memorial Hospital, Bayer Properties (developers of The Summit at Fritz Farm), Dominion Enterprises, and Greer Companies (major franchisee of Cheddar’s Casual Café). John is an avid horseracing fan with a genuine passion for the sport and the Commonwealth’s role as the epicenter of the thoroughbred world.  He has represented a number of domestic and foreign clients in all aspects of thoroughbred breeding and racing.  John is the former Vice Chairman of the Kentucky Horse Racing Commission.  Among the many equine transactions and litigation matters in which Mr. Roach has participated, he is proud to have served as lead counsel in the stallion syndication of PIONEEROF THE NILE, sire of Triple Crown Winner and Breeders’ Cup Champion AMERICAN PHAROAH.  He has been included in The Best Lawyers in America® for numerous years and is AV Preeminent® Peer Review Rated by Martindale-Hubbell®. His practice primarily focuses on commercial litigation, appellate advocacy, labor and employment law and litigation, equine law, and corporate transactions for businesses and entrepreneurs.

Mediator and Arbitrator
Over the last several years, John has devoted more time to serving as a mediator and an arbitrator. John is an American Arbitration Association Panel Member and has been serving as an arbitrator through the AAA and privately by mutual agreement of the parties.  Although John first served as a mediator in 2002 when he successfully mediated Toyota Motor Mfg., Kentucky, Inc. v. Williams, 534 U.S. 184 (2002) after remand from the United States Supreme Court, he has recently begun to devote more time and attention to serving as a mediator.